Located approximately 240 kilometres away from the Capital of Himachal Pradesh lies an Isolated valley of Kinnaur. Also Known as Land of Gods Kinnaur is surrounded by 3 Major Mountain 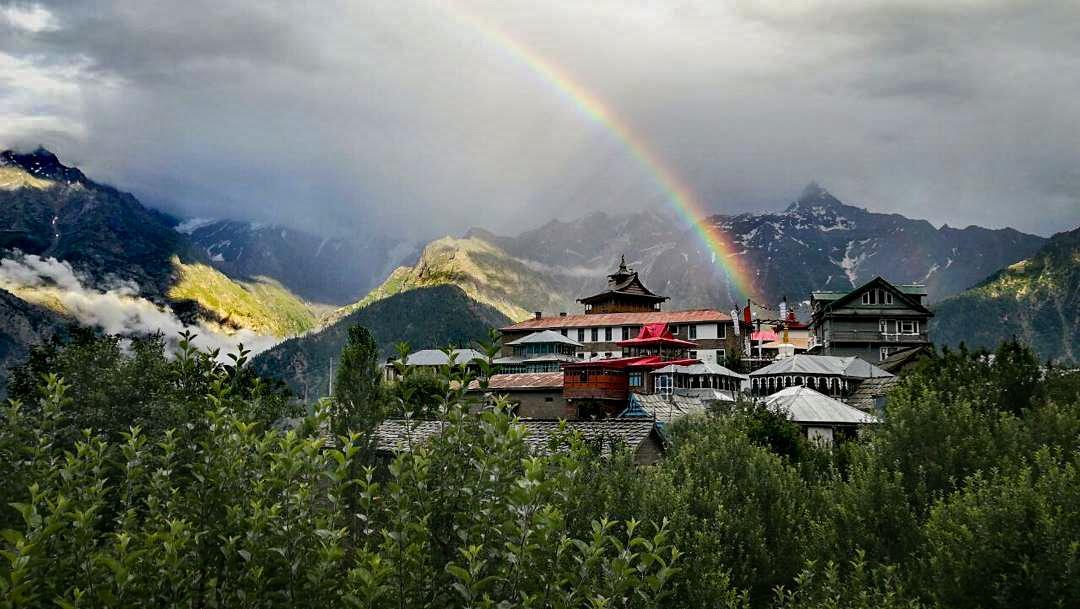 Ranges of Himalayas, Dhauladhar and Zanskar. The Beauty of this splendid valley attracts many tourists from around the globe every year. If you are planning to go to Kinnaur and want to know some of the amazing places to visit in Kinnaur valley then this blog is the right spot for you.

Here are some of the best places to visit in Kinnaur:

Kalpa is a beautiful hamlet located 16 kilometres away from the Shimla-Kaza highway. This place can be considered one of the most visited tourist destinations in Kinnaur. Known for its Apple orchards and pinewood lines Kalpa is an ideal vacation spot for travellers who want to experience the silent and peaceful ambience of the Himalayas.

Kalpa is accessible for tourists all around the year. Like other Himalayan destinations, it is not advisable to go to Kalpa in the month of July and August as due to Heavy Rainfall the roads get muddy and slippery and there are chances of Roadblocks due to Landslides as well.

In winters the temperature drops to -20 C and the village turns white which give you an out of the world experience. Overall the best time to visit Kalpa is between the months of April and June. Nearby Attractions in Kalpa include Sapni Fort, Chakka Trek, Narayan-Nagini Temple, Kalpa Monastery.

Located at the borderlines of India Chitkul is known to be the last village at Indo-Tibet Border. It is located at an altitude of 3450 meters above sea level. This place is famous for the Chitkul Mata Temple and is considered one of the best offbeat destinations of Himachal Pradesh.

Not only the Village but the road to reach the village will give you an experience of its own. Located at the banks of the Baspa River, Chitkul is also the base for the famous treks of the Gangotri trekking trail and Kailash Parikrama Trek. One thing to know about this place is that there are no networks here other than BSNL which makes this place apt for those who are travelling to experience the remoteness of the Himalayas.

This place is mostly not accessible in winters and the best time to visit Chitkul would be the months of April, May, June, September and October. Overall Chitkul has good connectivity and one can easily reach Chitkul via shared or private cabs, Personal Vehicles and State transports.

Located at an amazing altitude of 6500 meters Kinnar Kailash literally means the “Mountain of Lord Shiva”. This place holds quite a religious importance among the locals and every year many of the devotees visit this place. The religious significance and the panoramic views of the Himalayan

Mountain ranges make Kinnar Kailash one of the finest places to visit in Kinnaur valley. According to the popular belief of local Kinnar Kailash is a place where lord shiva used to conduct the meeting of Hindu Gods and Goddesses. The base camp of this trek is Tangling village which is near Reckong Peo (Also known as Headquarters of Kinnaur District).

This trek is only accessible for 2 months in a year due to altitude and heavy snowfall in the upper region of the trek.

Located at an altitude of 3625 meters above the sea level, Nako village is the last village of Kinnaur valley. It lies very close to the Indo-Tibet Border because of which travellers need to have a In-line permit to stay in this beautiful Village.

One of the most important attractions of this place is the majestic Nako Lake. This secluded village is perfect for those who want to spend some quality time in the laps of Himalayas and absorb the tranquility of it.

Mostly people who are travelling to Spiti from Shimla prefer to take a halt at this village.

Being close to the Indo-Tibet Border you can experience the true essence of Himalayan And Tibitean Culture. Overall the best time to visit Nako is anywhere between April and October. The road to the village remains closed during peak winters because of the heavy snowfall in the region during this time.

Overall, Kinnaur is an Amazing Himalayan Valley to explore as it has a lot to offer from Cultural richness to High altitude Treks to Secluded Himalayan Villages. Overall if you want to experience the mindful calmness and the sky full of sparkling stars then this valley holds the capability of providing you with that.